History in the making

When I first saw the juxtaposed images NBC News released of the crowds at St. Peter’s Square in 2005 and 2013, during the announcement of the new Pope, I thought it was amazing how technology has advanced so dramatically in just a few years. This was my first thought despite the fact that I teach all things digital and discuss Moore’s Law on a regular basis in my lectures. 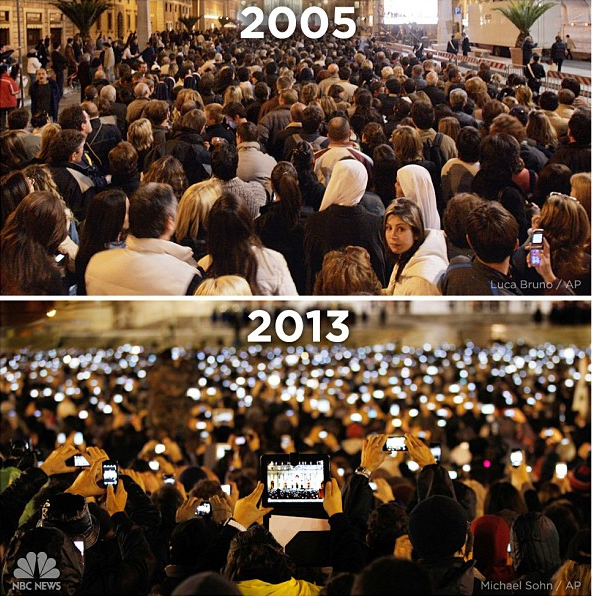 History needs to be documented. There is no arguing that. Photojournalists have the job, be it good or bad, of capturing this history, often times being forced to stand by and let life move forward while they remain behind the lens; even if it means that they helplessly watch people die on the other side of that lens.

Photojournalists have a job to do. They are there as documentarians, as historians, as archivists. The crowds surrounding them are there as actors or audience members of the event, and the audience should sit back and embrace the scene. There is no need for everyone to take up the role of historian, holding a camera in hand, especially when we can share images so easily through the Internet.

The more I see everyone taking photos and videos with their cell phones, the less I want a phone that can. I often grab my phone out of my pocket at the playground or at an event to capture something my children are doing because I want to record it for posterity (and to post on Facebook for friends and family to ooh and aww over too).

Lately, every time I pull that phone out into the open I wonder if the other people around me are thinking ill of my actions. Do they look at me and wonder why am I not engaging with my kids instead of stepping back to capture the moment?

Being present from behind the screen makes me wonder if I am actually enjoying the moment or the idea of the moment. Memories exist without documented proof that “I was there”.

We capture these moments from our lives in an effort to share them with others. We post to Facebook, Twitter, Youtube, Instagram, and countless other online social media outlets in order to share our lives with the world. Sometimes we choose to share those moments with our most trusted friends and family, but often, we choose to post our digitized memory for the entire world to see. In essence, we are staking claim that ‘I was there’ or ‘I did that’. Sadly, this has spiralled out of control, leaving the Internet full of images of food right before it’s consumption. Who cares what we ate for lunch other than maybe our doctor or nutritionist?

Taking photos of our vacations is a tradition almost as old as photography itself, but one inherent aspect has changed: we no longer create a photo album. One could argue that we do, in fact, create albums for our trips by sorting and cataloguing the vacation images into the same folder on Facebook and giving it a title of ‘Vacation 2013’, but that is not the same. The intent to share is still there, but the social act has been removed. Comments and ‘Likes’ are added to the photos online, and arguably, a conversation of sorts can occur between the poster and the commenters, but it is not the same as sitting down on the couch or at the dinner table with a friend and sharing anecdotes and adventures from the trip, and engaging in a conversation fuelled by body language, tone of voice, and the physical artifact being discussed.

Audiophiles argue that despite the advancements in technology over the past several decades, you still can’t beat the sound from a vinyl record. The same may be true for the photograph.