I recently completed a master’s degree at McMaster University in Communication and New Media. My major research project—completed as a requirement for graduation—was a study on how Twitter affects civic engagement and community at a municipal level. I compared two case studies involving the city of Hamilton, Ontario, Canada.

In the city of Hamilton, Ontario, Canada, Twitter has become a key tool for citizens engaging in civic change, functioning both as a public forum and a method of mobilization. Twitter was especially prominent in two campaigns: ‘Yes We Cannon’ (a campaign to have bike lanes added to Cannon street by 2015) and ‘Dialogue Partners’ (an online campaign in 2013 to have a city-hired PR firm contract terminated). A prominent blog on civic issues in Hamilton, Raise the Hammer, noted, “Yes We Cannon made strategic use of social media - both Facebook and Twitter - to reach a wide audience in a short amount of time”[2] and CBC Hamilton claimed that protesters involved in ousting Dialogue Partners “[made] the city of Hamilton reconsider how it represents itself on social media. And they did it all on Twitter”.[1] Hamilton is seeing a surge of civic engagement, and much of it occurring online through social networking sites like Twitter.

Researchers have investigated the role of Twitter in large-scale movements like Occupy Wall Street and the Arab Springs, but Hamilton represents a different sort of case. Civic engagement in Hamilton is focused on specific local issues rather than toppling governments or revolutionizing the world. Studying Twitter’s relationship to civic engagement in Hamilton is important to better understanding how it facilitates change and fosters community within smaller populations/geographic regions than those of Occupy and the Arab Springs.

A Yes We Cannon Victory is a Victory for Us All, Raise the Hammer

An online survey was distributed via Twitter to gather information from users in the city of Hamilton. After the results of the survey were analyzed, open interviews were conducted with key figures involved in the “Yes We Cannon” and “Dialogue Partners” movements to respond to and enrich the survey findings.

The video interviews were edited into a mini-documentary, covering the Yes We Cannon case study from this project and the general topics of community and civic engagement in Hamilton. The final edited documentary is hosted on www.HamOnt.net.

The web site was created to help communicate this research to those involved in civic engagement and community issues in Hamilton. It offers insights into how slacktivism can help a cause succeed, alerts users to the potential hazards of the digital divide, as well as understanding how community can be fostered within particular groups on Twitter, such as those who become involved in issues of civic engagement.

The web site includes a final draft of the paper, the video documentary (including edited versions of key figure interviews), aggregated survey findings, as well as case studies discussing the history and outcomes of the Yes We Cannon and Dialogue Partners fiasco movements. Interactive timelines and links to outside sources (news articles, relevant tweets, etc.) are included on the web site, extending its usefulness for the greater public. 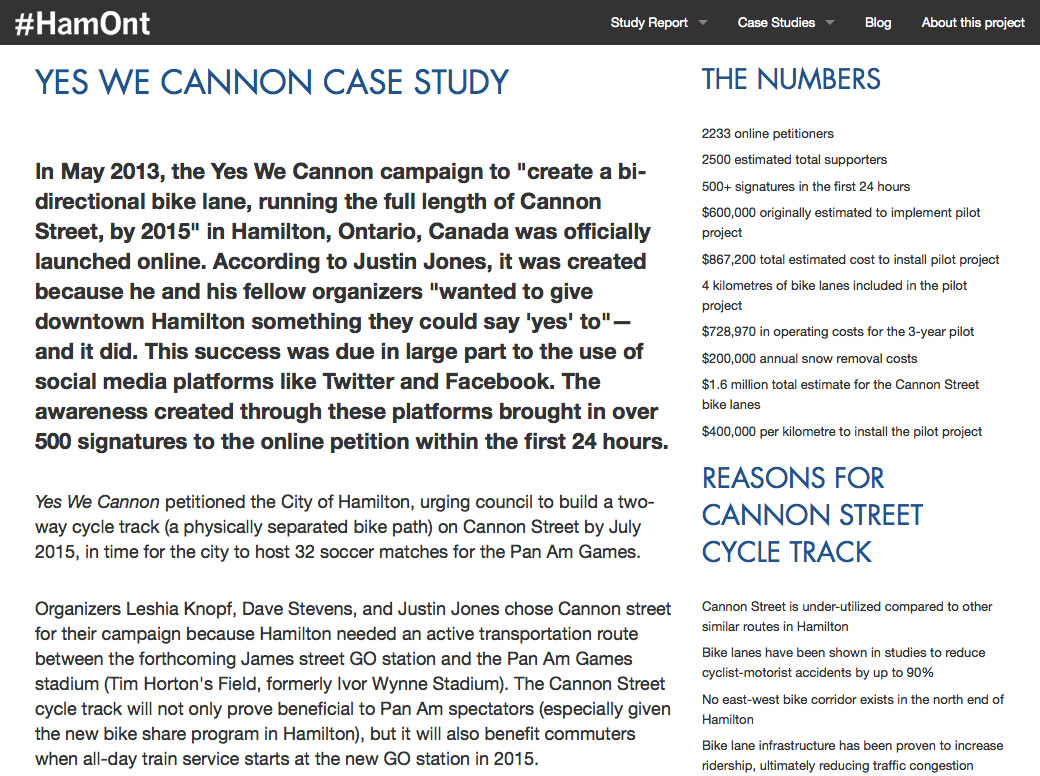 A screen shot of the HamOnt.net site

The research findings were presented during a peer reviewed poster session at the Social Media and Society conference in Toronto, Ontario, Canada.

The documentary was screened during the Hamilton Film Festival in their short documentary category this past November.

The research was also covered by local media:

Special Thanks needs to be credited to Dr. Christina Baade, my research supervisor, who pushed me to exceed my own expectations. As a result of her tireless efforts, my paper was passed with distinction by the graduate committee. This honour meant more to me than any of the publicity I recieved elsewhere. Thank you, Christina.